A vexed question. This one was so overgrown it qualified as a marrow. We’d already done the standard stuffed marrow with half of it, and still had enough left for another meal. A bit of googling turned up something called “savoury marrow bake” at AllRecipes. I glanced at it half-heartedly and then realised it wasn’t stuffed marrow but a kind of frittata/crustless quiche for which we had all the ingredients. So we took the idea and ran with it, changing quantities to make a lighter, more slimmer-friendly dish. Of course you could add or substitute other veg if you wanted.

We were very pleasantly surprised by the result. The flour and baking powder give it a smooth yet light texture quite different from frittata. You can eat it warm or cold; we had it with a tomato sauce, but chilli jam would be excellent too. Good picnic or buffet fare, cut into small squares. Or use it as a side dish with anything that has a sauce. Definitely a keeper. Now I just need to think of a name for it.
END_OF_DOCUMENT_TOKEN_TO_BE_REPLACED

Quickly put together from bits and pieces in fridge and freezer and inspiration yet again from Slimming World. I served it with some leftover boiled rice; otherwise I would have used Chinese egg noodles. Use a bag of frozen stir-fry vegetables to save time, and it will only take 20-25 minutes from starting to getting it on the table.
END_OF_DOCUMENT_TOKEN_TO_BE_REPLACED 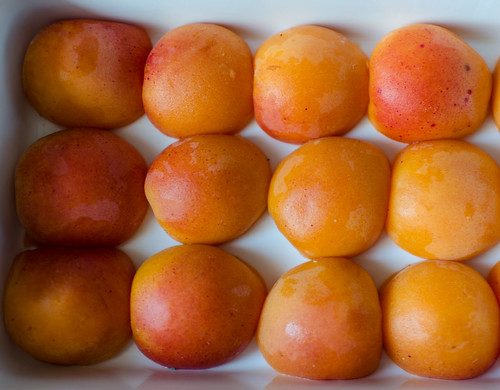 A slightly revised version of a BBC recipe. It’s just made for the tart, red-tinged apricots we get here. Apricots are nearly always disappointing raw, but brief cooking really intensifies the flavour. Baking in the oven rather than cooking on the stove top is gentler and means they are less likely to collapse. I do them when I am using the oven for something else anyway. Do plenty, and store in the fridge for instant dessert with cream, fromage frais, or ice cream.
END_OF_DOCUMENT_TOKEN_TO_BE_REPLACED

As you can see, it was difficult to decide what to call this. I freely admit to lifting it almost wholesale from Baking in Franglais, because I had a few ripe apricots that needed using quickly. As usual, I made a few changes; I forgot to buy an orange, so I added lemon zest instead, and I used only apricots because I’d eaten all the cherries. Also, the recipe specifies a 20-cm springform tin. In my cupboard I have an 18-cm and a 22-cm one. Hmph. I decided to go for the 22-cm one until I saw what a tiny amount of mixture there was. The 18-cm one was the perfect size, producing a taller cake than Jean’s. I reckon I could have doubled the recipe if I’d used the 22-cm tin.

Verdict: a really good, light cake with very little fat and sugar. Cold, you can eat it as cake; we had it slightly warm for dessert with a dollop of chilled fromage frais, but cream or custard would be fine too, of course. It’s a keeper, for those times when you have a small amount of ripe fruit to use up. I’m sure it would be great with plums, cherries or peaches, apples or pears, or any combination. You can vary the other flavourings according to what fruit you use.
END_OF_DOCUMENT_TOKEN_TO_BE_REPLACED

I cooked this based on a recipe from Slimming World, believe it or not, adapted to my own tastes and what I had available. It will be appreciated by slimmers and non-slimmers alike. The vegetables become meltingly soft and sweet, imbued with the flavour of the stock. Very easy when you have guests too, because you can just put it in the oven an hour before the meal and leave it to cook. I added roast spuds for a complete meal, followed by a crisp, simple green salad.
END_OF_DOCUMENT_TOKEN_TO_BE_REPLACED

This is based on a recipe from the Hairy Bikers’ diet book. It’s quick, delicious, cheap, and less than 200 calories a portion — definitely worth saving for posterity. If on a diet, serve with plain boiled rice or Chinese noodles.

Note, no rice wine here so I used Noilly Prat. You could use not-too-dry white wine, or sherry.
END_OF_DOCUMENT_TOKEN_TO_BE_REPLACED This is a truly classic Catalan sauce. Pounded nuts, usually almonds, are a strong feature of Catalan cooking, used to thicken sauces, whether savoury or sweet. Romesco sauce is very versatile: you can serve it with plainly grilled or baked fish, for example. Or steak. Or even escalivade. A very traditional combination is with calçots, young green onions that are grilled over an open fire in winter and early spring. They’re served on a roof tile to keep them warm, and eating them (with your fingers) is a messy business; when I ate them in a restaurant, I was provided with a bib!

It’s an uncooked sauce which is ridiculously easy to make — it will take you five minutes if you use a jar of peppers and a food processor or blender. I used the method in this video, substituting salt for the anchovies. Anchovies are not traditional, and they make the sauce unsuitable for vegetarians.
END_OF_DOCUMENT_TOKEN_TO_BE_REPLACED

An Elizabeth David book in the reserve collection? Yes, really! This was a Christmas present a few years ago, and I confess I’d forgotten I had it, so I pounced on it with a cry of delight. It was actually published posthumously; in her preface her editor Jill Norman says they’d discussed the concept off and on for years, but it never came to anything, so after Elizabeth’s death she was surprised to find a box with a pile of notes and clippings for the book, and even an introduction. So she pulled the material together and published it.

Many of the recipes are from ED’s other books, but it’s nice to have all these seasonal recipes in one place. Not that ED was much of a fan of the traditional British Christmas. She got bombarded with calls from friends and family asking how long to to cook the turkey or the pudding, or saying they’d lost the recipe for Cumberland sauce so could she give it them again — to the point where she printed a pamphlet of the most popular recipes and handed it out to them. Classic ED:

If I had my way — and I shan’t — my Christmas Day eating and drinking would consist of an omelette and cold ham and a nice bottle of wine at lunchtime, and a smoked salmon sandwich with a glass of champagne on a tray in bed in the evening.

What frenetic cook preparing for a family Christmas can’t empathise with that in the days leading up to “the Great Too Long”? It certainly makes a refreshing change from other Christmas cookbooks.

That being said, although there are token recipes for traditional Christmas food like mincemeat and Christmas pudding, much of the focus of this book is on simple but impressive small dishes that can be prepared ahead, pâtés and terrines that can be kept in the fridge for nibbling, and better-than-average ways of using leftovers (including one of my all-time favourite leftover dishes, émincé de volaille au fromage). And like all of ED’s books it is designed to be read for pleasure, not just to cook from. I happily spent an afternoon lounging on the sofa by the fire reading it while my untended bread dough bubbled over the edge of the pan.

Happily, the organic veg box provided all I needed for a simple soup of tomato, leek and celery. She writes “This is one of the most subtly flavoured of all these vegetable soups … a good soup with which to start the Christmas dinner.” It was indeed. Celery is something I don’t like as a vegetable, but as a herb it adds a nice peppery edge to soups and stews. My tail-end-of-season tomatoes weren’t the best, but they did the job — if I make it again at Christmas I’ll use tinned ones in preference to tasteless fresh ones (one day I’m going to start a campaign to ban the sale of fresh tomatoes between October and May).

Unfortunately, the box also contained parsnips, for the third week in a row. So I decided to give her cream of parsnips and ginger with eggs a go. I got as far as cooking and mouli-ing the parsnips and adding the ginger, and the result tasted so unutterably foul that I almost threw it straight in the bin. We just had soup and cheese and biscuits that evening. I don’t think I can blame Elizabeth David for this though — I just don’t like parsnips, and somehow mashing them makes them taste more parsnippy than just roasting would.

This book will definitely stay in my collection. And it’s a good Christmas gift for foodies as well, a reminder of how truly good food writing is impervious to fashion. So much so that the modish soft-focus photos that the publishers obviously felt had to be in any modern cookbook are entirely superfluous. Elizabeth David’s words are enough
END_OF_DOCUMENT_TOKEN_TO_BE_REPLACED This is my version of the chilli jam recipe. I found the original rather imprecise in some ways. For example, it gives weights for some ingredients but then just specifies “8 red peppers”. Mine were huge, at least double the normal size, so I used four. Then it says “10 red chillies”, without any qualification — a little dangerous in my view. Throw in 10 Scotch Bonnet chillies with their seeds and the jam will blow your head off. I did like one comment on the BBC site which queried the “finger-sized piece of ginger” because “I have big hands”! As always, nothing beats tasting and adjusting as you go.
END_OF_DOCUMENT_TOKEN_TO_BE_REPLACED

A carrot salad might sound a bit dull, but this Ottolenghi recipe is really lovely. It reminds me of the delicious carrots I had as a side dish at a Lebanese restaurant in Vejer de la Frontera, Spain. I tweaked it a bit for French tastes (no chillis!). It’s very versatile — it can be served warm or at room temperature, as a dish in its own right, as one of a selection of hors d’oeuvres, or as a side dish. You can of course vary the spices according to taste.
END_OF_DOCUMENT_TOKEN_TO_BE_REPLACED