Based on a recipe from BBC Good Food; adapted to make it a bit more Slimming World friendly (OK, pastry will never be syn-free, but the rest of it almost is). It may sound fairly ordinary, but it was really delicious and well worth repeating — it’s the mustard that really makes it shine. If you’re not on a diet you can use crème fraîche instead of quark, but we found the quark worked really well; the flour in the sauce stops it curdling. The original recipe specified puff pastry, but we just used home-made shortcrust and it was fine. In fact thinking about it, you could maybe use a few layers of filo pastry on top to reduce fat further. It’s best to make the filling ahead of time and let it cool before adding the pastry.
END_OF_DOCUMENT_TOKEN_TO_BE_REPLACED

Well, it had to come to this — with starter always on hand, I was eventually going to try making pitta bread with it. Turns out a quick Google was enough; I found a recipe on sourdough.com that worked first time. Here’s my version of it for the record. Strong bread flour doesn’t exist in France, so again I adapted it according to what I have. This recipe involves leaving it in the fridge overnight, but you don’t have to do that — you could just leave it at room temperature for 2-3 hours if it’s more convenient that way.

See also my non-sourdough version, which you can do on the dough cycle in a bread machine.
END_OF_DOCUMENT_TOKEN_TO_BE_REPLACED

I was given Provence, 1970 for Christmas and have just been reading it. In it, a group of well-off Americans, all interested in food, gather in Provence in autumn 1970, cook, dine, and have endless conversations about food and wine. They just happen to include Julia Child and her husband Paul, M.F.K. Fisher, James Beard, and Richard Olney. I enjoyed it in a cosy sort of way, eavesdropping on their gossip and occasional snobbery. The author, Luke Barr, is MFK’s great-nephew, and he used letters and especially his great-aunt’s notebooks and diaries, to reconstruct whole evenings of conversation in a convincing way. I have to say that I wasn’t surprised to find that Olney, while probably the best cook of the lot of them, could be a somewhat unpleasant character — his Simple French Food is written in such a way that I never felt I’d be comfortable in the kitchen with him, just as I wouldn’t be with Elizabeth David. Whereas Jane Grigson, MFK, or Julia Child would surely be good company. It was a bit disappointing to find that Sybille Bedford (partner of an old friend of MFK’s) could be rather obnoxious as well though.

Serendipitously, we were looking for a recipe for stuffed cabbage and found one in Olney’s book. Oh, good, a chance to revive my neglected cookbooks theme! I’ve had this book for many years and even blogged a recipe from it once, but I don’t get it out often. There’s no denying the quality of the recipes; it’s the turgid prose that puts me off. The first sentence sets the tone: it’s 124 words long. He’s the kind of person who refers to himself as “one”, and his paragraphs are unnecessarily long and rambling.

Still, the proof of the pudding and all that. Alice Waters quotes him as her main inspiration for Chez Panisse, and by and large I’ve been happy with the results of the recipes I’ve tried. He has taken traditional French bourgeois cooking and turned it into an art form. I have to say that while stuffed cabbage may sound dull, if not positively offputting, it was spectacularly good. So if you’re a fan of traditional French cooking and you can get past the convolutions of his prose style, it’s worth having on your shelf. But if you’re not an experienced cook, I still believe no-one surpasses Mireille Johnston for authenticity and accessibility. Mireille’s is the book that’s splattered with food stains in our house. Such a shame it’s out of print; on the other hand it does mean you can obtain cheap second-hand copies.

Anyway, here’s the stuffed cabbage. We made this with pork mince from organic, free-range pigs browsing under oaks in the Aragonese Pyrenees, which probably had a lot to do with the excellent flavour. We didn’t have much stock, so we just made it up with water and flavoured it with a whole peeled onion and a couple of carrots. You need a piece of muslin or a string bag to wrap the cabbage in, and some string.
END_OF_DOCUMENT_TOKEN_TO_BE_REPLACED

This is one of those delightfully easy “stick it in the oven and forget about it” supper dishes. Other than green veg or salad, you won’t need anything with it, and even drab supermarket chicken will be suitably perked up. It’s from a Sainsbury’s magazine, slightly adapted by me: the original called for halved new potatoes, but it seemed entirely implausible to me that they would cook from raw in the oven in 45 minutes. So I cut my (non-new) potatoes into 2-cm chunks, and they were just barely cooked in an hour. If you do want to use larger pieces, you’d be well advised to parboil them for about 3 minutes first, but this makes a bit more work.

I cooked this in two gratin dishes; it will serve about six.
END_OF_DOCUMENT_TOKEN_TO_BE_REPLACED

This isn’t really hummus, because it doesn’t have oil or tahini in it. But if you’re trying to cut down on fat intake, it’s not a bad substitute, and it is very quick and easy to make using a jar of chickpeas and a few other ingredients you’re likely to have on hand. It’s part of our campaign for healthier nibbles to eat with aperos; we have it with raw carrot sticks, but you can use other vehicles of your choice, including pitta bread of course.

END_OF_DOCUMENT_TOKEN_TO_BE_REPLACED

When in Spain … it has to be arroz con leche, not plain old rice pudding. Truth to tell, the two are almost identical. In Spain, the arroz is always served cold, with a generous sprinkling of cinnamon, one of the three spices used in unadventurous Spain (the others are saffron and paprika). And of course the rice used is paella rice (bomba), subtly different from the round-grain Carolina rice we use. Many Spanish recipes specify partly cooking the rice in water and then adding it to the milk, but I don’t hold with that — I like my pudding thick and creamy, and you need all the starch in the rice for that.

TV chef Karlos Arguiñano’s recipe suits me; he cooks it in milk, and the only thing I changed was the amount of sugar (many Spanish dishes are over-sweet for my taste) — plus we had it hot.
END_OF_DOCUMENT_TOKEN_TO_BE_REPLACED

This is the quickest, easiest way of using up surplus sourdough starter. It makes small, American-style pancakes. Excellent with maple syrup and cream or quark, but they are also a good substitute for blinis to serve with smoked salmon and cream cheese. Hardly needs a recipe and quantities are vague. Usually I have about 100-150 ml of starter and I use one egg for this quantity. But if the batter seems too runny, add a bit of flour; if too thick, a bit of water.

They freeze well, wrapped in foil, and can be reheated in the oven, still wrapped.

Update: an even easier option is making pikelets; the method is basically the same as for these pancakes but without the egg and oil. Just mix a cup of your starter with a teaspoon of sugar, a pinch of salt, and half a teaspoon of baking powder. Let stand for a few minutes till it starts to bubble, then cook blobs of it over a low heat till the top is bubbly, before turning to cook the other side. This is so quick you can routinely do it when you’re feeding your starter and then either eat the pikelets or freeze them. Idea from here, thanks Joy!
END_OF_DOCUMENT_TOKEN_TO_BE_REPLACED

A vexed question. This one was so overgrown it qualified as a marrow. We’d already done the standard stuffed marrow with half of it, and still had enough left for another meal. A bit of googling turned up something called “savoury marrow bake” at AllRecipes. I glanced at it half-heartedly and then realised it wasn’t stuffed marrow but a kind of frittata/crustless quiche for which we had all the ingredients. So we took the idea and ran with it, changing quantities to make a lighter, more slimmer-friendly dish. Of course you could add or substitute other veg if you wanted.

We were very pleasantly surprised by the result. The flour and baking powder give it a smooth yet light texture quite different from frittata. You can eat it warm or cold; we had it with a tomato sauce, but chilli jam would be excellent too. Good picnic or buffet fare, cut into small squares. Or use it as a side dish with anything that has a sauce. Definitely a keeper. Now I just need to think of a name for it.
END_OF_DOCUMENT_TOKEN_TO_BE_REPLACED

Quickly put together from bits and pieces in fridge and freezer and inspiration yet again from Slimming World. I served it with some leftover boiled rice; otherwise I would have used Chinese egg noodles. Use a bag of frozen stir-fry vegetables to save time, and it will only take 20-25 minutes from starting to getting it on the table.
END_OF_DOCUMENT_TOKEN_TO_BE_REPLACED 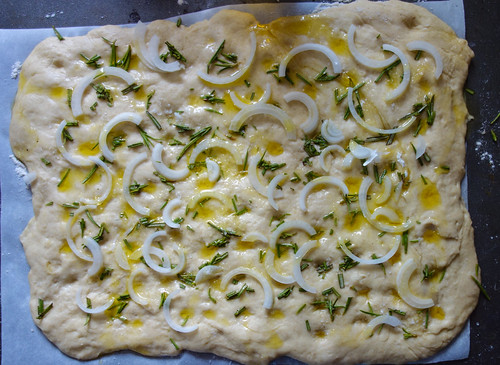 When you make sourdough you are always looking for ways of using up starter. This recipe (also known as fougasse in France) was a good accompaniment for post-film drinks. It’s great for picnics too. I started it in the morning and baked it late afternoon. It’s best warm or cold rather than piping hot from the oven.

This recipe is fine with ordinary plain flour, but you can use white bread flour if you want, or a half-and-half mixture. Whatever you choose, the dough is very wet and sticky to work with, so if you have a stand mixer with a dough hook, I really recommend using it. If not, use the “kneading” technique of using one floured hand to stretch and fold the dough in the bowl — no need to turn it out, and you can keep your other hand clean.

Toppings: this isn’t pizza, so topping should be scanty and not too complicated — two or at most three elements. You can keep it plain by just sprinkling fleur de sel and olive oil over it. For this occasion I did some with chopped rosemary and onion, and others with sliced artichoke hearts and a few squirts of pesto. Sun-dried tomatoes and serrano ham or prosciutto are a good choice too — or use your imagination and go for something more original like crumbled blue cheese and thin slices of pear. In all cases, finish with oil and salt.
END_OF_DOCUMENT_TOKEN_TO_BE_REPLACED