Gougères, little domes of cheese-flavoured choux pastry, are a classic accompaniment for a glass or two of wine. Offering them to guests makes it seem that you’ve gone to a lot of trouble — and you have. But the actual processes involved are quite straightforward. I got this recipe from a professional chef on the choux pastry course I went on recently. Unusually, it includes crumbled roquefort as well as gruyère. It’s a good addition — it gives them an extra sharp tang, while the “blueness” is undetectable.

This recipe makes a lot of gougères — about 40. You could always halve it but a) they are very moreish, and b) they freeze pretty well. Just pop the frozen gougères in a pre-heated oven for 5-10 minutes and they will be as good as new. They are best still just warm, but if you’ve prepared them in advance (without freezing) you can again crisp them up briefly in the oven before serving. Or, if you don’t want that many gougères, split the dough in half before adding the cheese and use half to make profiteroles, choux à la crème, or chouquettes.
END_OF_DOCUMENT_TOKEN_TO_BE_REPLACED 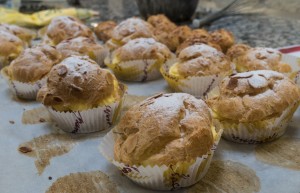 Yesterday I attended a half-day patisserie workshop based around choux pastry. In the course of it, we made some crème mousseline to fill our choux buns. This was a new one for me: it’s basically crème pâtissière with an unfeasibly large amount of butter beaten into it, resulting in a cream that is both airy and rich, and will not collapse under load. It’s apparently the basis for such treats as fraisiers and tropéziennes. Useful as a filling because its firmness means it won’t squelch out or drip when cut or bitten into. But it is very, very calorific, so special occasions only!

Best used on the day it’s made; it will go solid if refrigerated for more than a couple of hours because of all the butter. Apparently that can make it go grainy, but this can be fixed by putting it in the bowl of a stand mixer, starting the whisk at high speed, and then gently and briefly warming the outside of the bowl with a blowtorch (this is clearly a standard technique as our chef/instructor did this when the butter was too hard!). You could make this without a stand mixer (people obviously did in the past) but it’s a lot of work: much vigorous beating required.

The recipe below makes a massive amount, enough to fill at least 15 choux buns.
END_OF_DOCUMENT_TOKEN_TO_BE_REPLACED Many competent cooks seem to be terrified of making caramel. Why? It’s a doddle. There are only two things that can go wrong: burning it (due to inattention) and crystallising the sugar. The first problem is easily solved: don’t take your eyes off the caramel while it is cooking, and remove from the heat as soon as it is the right colour. As for the second problem, I discovered long ago that using sugar cubes instead of granulated sugar ensures that the sugar will melt smoothly and evenly without crystals forming. So give it a go! This sauce is excellent with ice cream, but useful for all sorts of other things as well — try it with apple slices fried in butter for example.
END_OF_DOCUMENT_TOKEN_TO_BE_REPLACED This is a wonderfully refreshing summer punch, to be drunk chilled outdoors on a hot day, as an aperitif. Prepare it in a very large earthenware bowl and ladle into wine glasses. Warning, it doesn’t taste at all alcoholic!